I hope you all had great holidays! I sure had. A lot of sitting around, eating and knitting. Before the year official end I’ll show you my retrospect on the year 2015. I feel like it happened a lot during 2015 and I also feel like time passed by much quicker than the years before, guess that’s something that comes with getting older.The biggest change for my was that I changed my job, and i feel like it was really worth it. Also I had a month free from everything in June and this month and the demotivating job I had in the first half of this year made me spend a lot of time with my favorite hobbies: sewing and knitting! And i also got around to visit Paris and buy a lot of fabrics. I sewed a lot of summer dresses and this year i started actually wearing them. From my sewing free time I got used to wearing jeans because dresses didn’t fit me, know that they do I kind of had to get used to them. I also started wearing shirts that I love to make. I just needed some time to get used to it. Plus my job now allows me to wear whatever I want to.

I’m not that kind of person who plans to alter this or that in the new year. The only thing that I tried to change in 2015 was to stop buying cheap fabrics and I managed to do that. I spend more money on my fabrics and I feel like this investment is worth it because my fashioning and my fitting became much much better during 2015. I started using french and flat felled seams and made a lot of muslins. 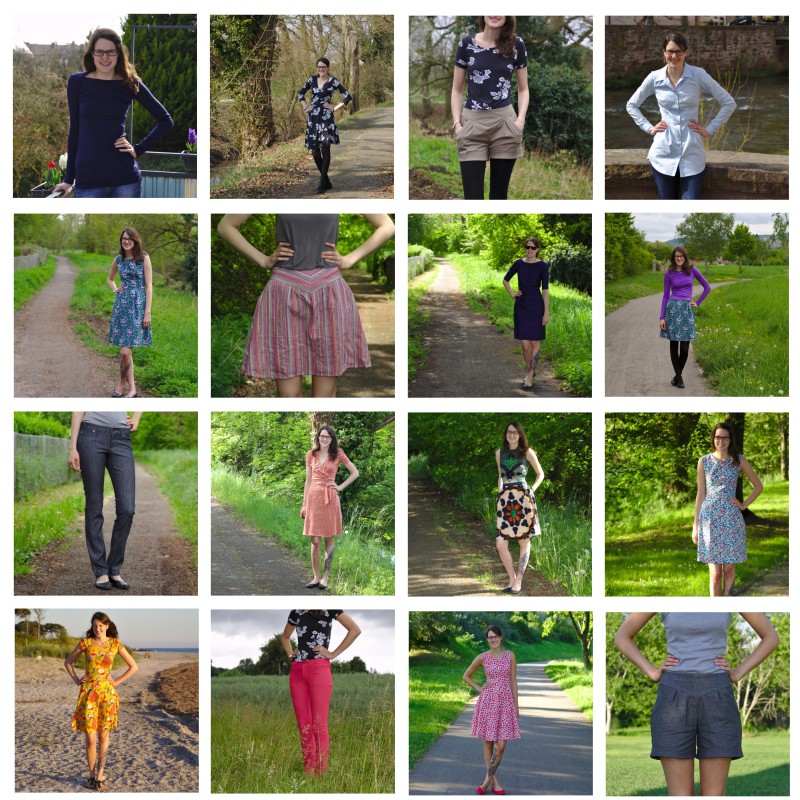 I also started repeating some patterns which means that I finally found some asics that fit me, yay! Amongst them are the Ginger Jeans, Hollyburn Skirt, Renfrew T-Shirt, Flora Dress, Hawthorn Dress, B5526, Kelly Skirt and some others. Knittingwise I sticked with Andi Satterlunds patterns which are my absolute favorites. I am a total fool for knitting seamless and top down and I don’t see that this obsession is going to stop soon :) 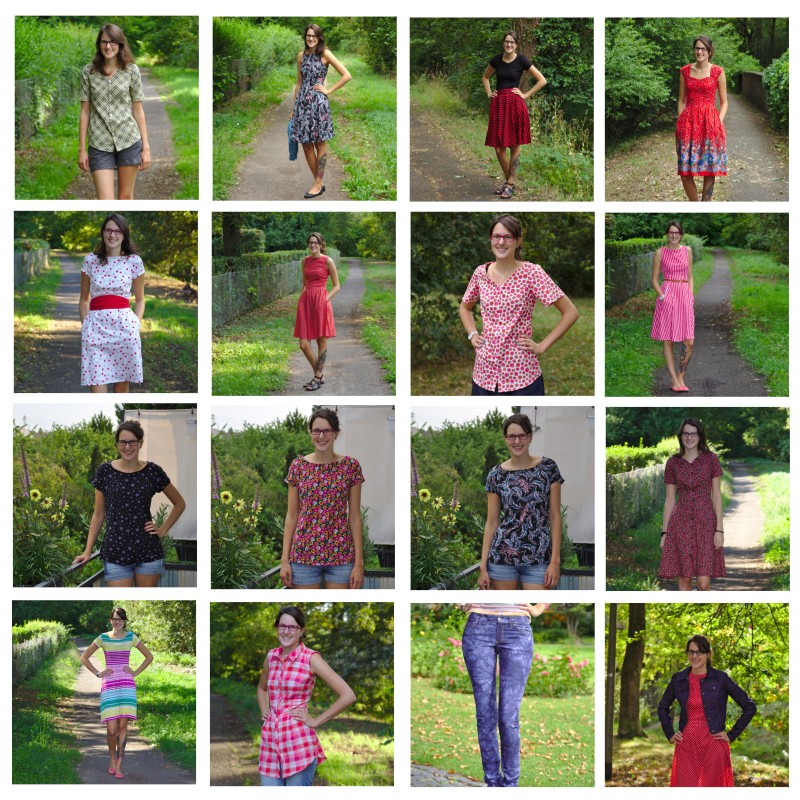 I already mentioned the ginger jeans but I feel like they deserve more space here. I am so happy about that pattern! And i feel like I never have to buy jeans again from the moment I made my first pair! I also tried sewing bras, but I wasn’t so successful in that area, they still don’t fit right but sewing them was a lot of fun! 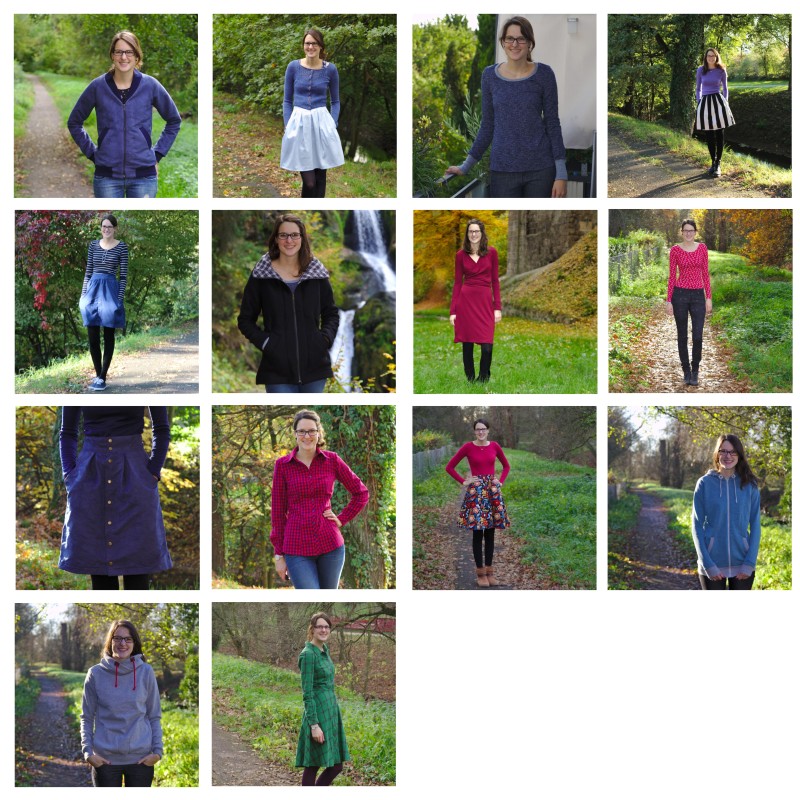 I also published a teeny tiny pattern this year for a knitting bag. And I wrote a tutorial on how I stabilize my button bands of hand knit cardigans. 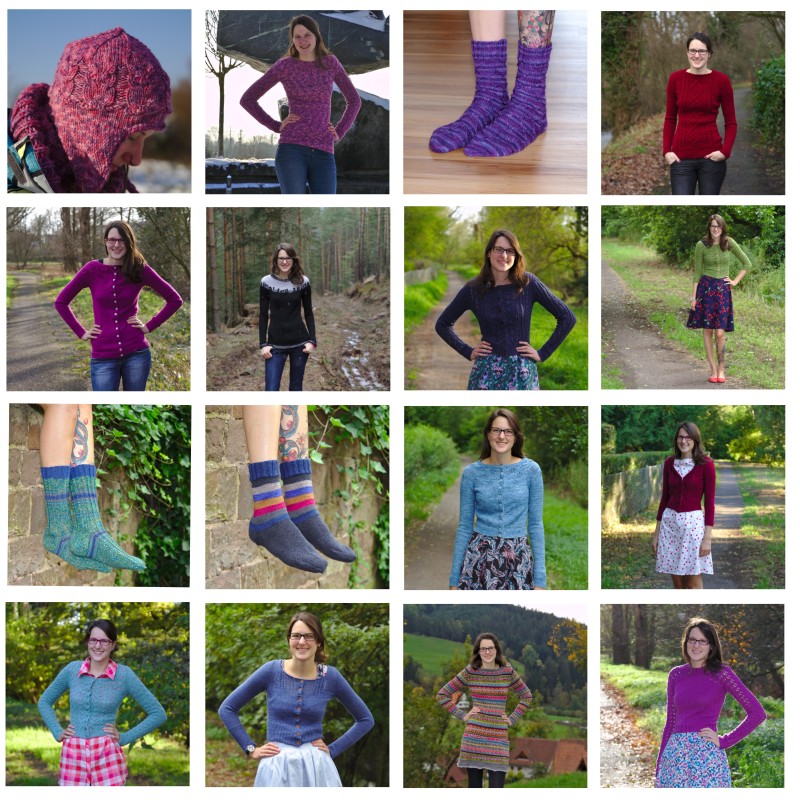 I participated on MeMadeMay this year for the first time an it was so much fun! Showing my handmade wardrobe everyday made me wear my handmade clothes even more often and with much more comfort as everyone was so kind and complimentary about them. I also discovered new blogs and interesting people. I also participated in this year’s Outfit Along hosted by Andi and Lauren. It was as last year a lot of fun and very inspiring to see so many women making such beautiful outfits.

I didn’t find that much time to blog the last month and so there are still some unblogged items in my drawer I’ll show you next year. Also I worked on something really really special these last few days/weeks and I’m so looking forward to the revelation! :)

I sorted the collages by 3 categories ‘sewing’, ‘knitting’ and ‘bags, undies and Marvin’s stuff’. Obviously I didn’t make that much bags this year, but the ones I made are worn daily. I added some knitting pictures from projects that I only showed on ravelry, if you want to read about them you can only do it there. Also there are pictures of projects in the collages from post that I didn’t translate, because I only started in April.

Next year will be exciting! Marvin and I are going to move again, which means a lot of work but also means a new sewing room. I don’t have any New Year’s resolution I always try to solve my problems as fast as possible and I am really pleased with everything right now :) (okay, I could buy less fabric in 2016, hahaha)

Thank you all for stopping by and taking the time to read my post. I am lucky to receive your kind and motivating emails and comments! I wish you all the best for 2016!