I made a few tops. And because I’m too lazy to blog about them individually I will show you all of them today :) I made these tops during the course of this summer, and I tried to show some of my tops with other garments as a whole outfit. But now that the temperatures slowly drop and the end of summer is in sight I thought it would be a good time to blog about those tops that haven’t made it on the blog so far. 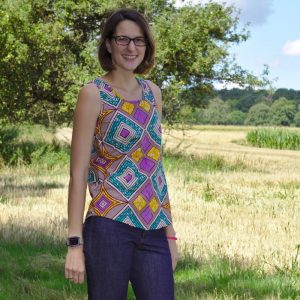 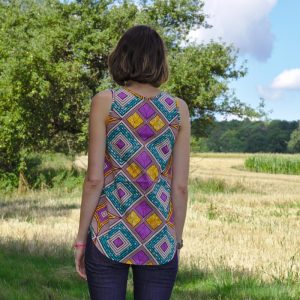 Let’s start with this colorful tank top. I made it from a woven waxprint that I bought ages ago. I don’t like the print that much and thought it would be a good fabric to test the cut. I copied the pattern from an rtw top and made some small adjustments. I had my eye on the  Eucalypt Tank Top by Megan Nielsen but I didn’t want to spend that much money on such a simple pattern (yeah, I’m kinda cheap!). So I made one myself. 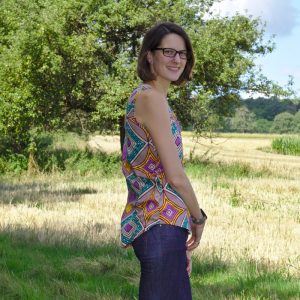 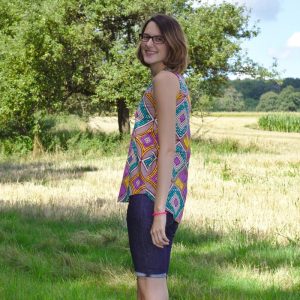 The top is wearable I would say. Although the pattern is placed a little unfortunate in my boob area… I only deepened the armscyes for the next version. 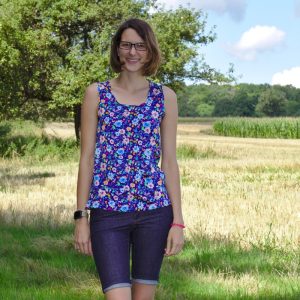 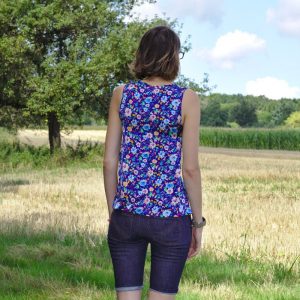 The second top from the same pattern is made from a Pierre Cardin silk print that I bought in Italy last year, it was a scrap an I only had about 70 cm of it, which.. isn’t that much. I made the top as long as possible, but as you can see it is quite a bit shorter than the test version. But I think it turned out long enough ;) 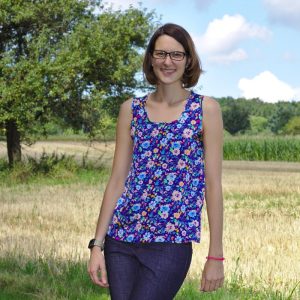 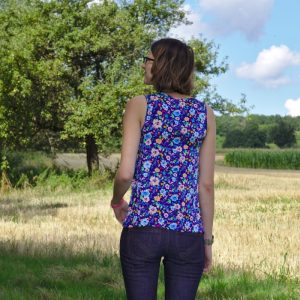 I french seamed all the seams, so that there was no chance they would unravel. After having worn this top a bit I think that bust darts might not have been such a bad idea. However, I’m happy with how both tops turned out. Just saying there’s still room for improvement. 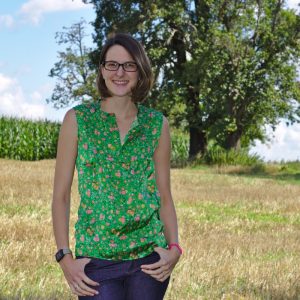 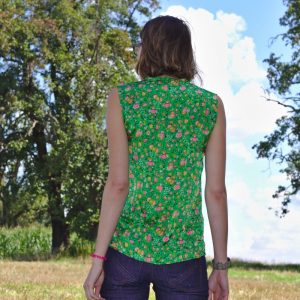 And since I am talking about silk fabric that I bought in Italy: here’s another one. I had a little more of the green fabric, maybe 1 m. I really had set my mind on making a shirt from it, but the pattern pieces of my favorite shirt pattern B5536 didn’t fit onto the fabric. So I thought about alternatives and decided to try the Tova Shirt pattern that I have sewed about 4 times already but always with sleeves. This time i wanted to go sleeveless. I wasn’t sure how that would look. And there was only one way to find out! :) 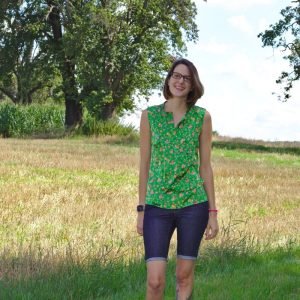 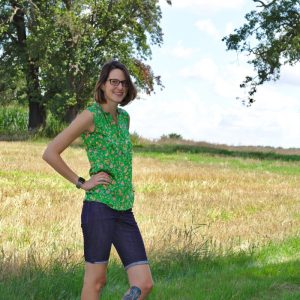 I’m happy with how it looks! The pattern is perfect for the fabric I think. It is kind of wide and shows the drape of the fabric nicely and you don’t need that much fabric. I french seamed the whole shirt as I was afraid that the seams would fray otherwise. Btw cutting and sewing both fabrics was a pain in the ass. I’m not a silk fan and I don’t like sewing it! 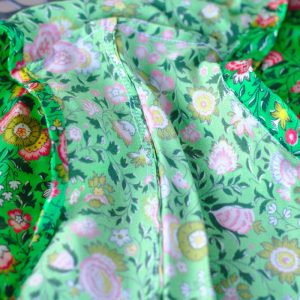 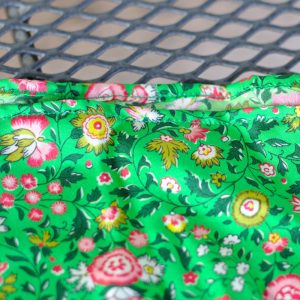 When you sew the blouse as per the instructions the wrong side of the fabric will be visible, because the button bands are not wrapped around the opening, but simply sewn on and completely flapped to the outside. Because my fabric doesn’t look nice form the wrong side I enclosed the raw front fabric edge with the button bands. 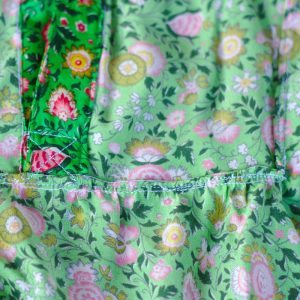 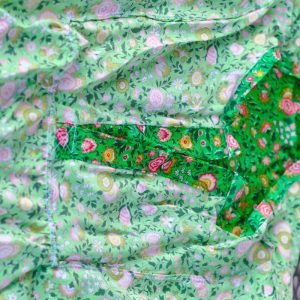 I didn’t use the collar piece but simply used self made bias tape for the neck binding and I also used that to finish the armscyes. 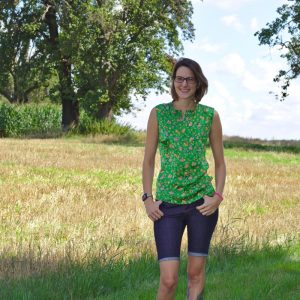 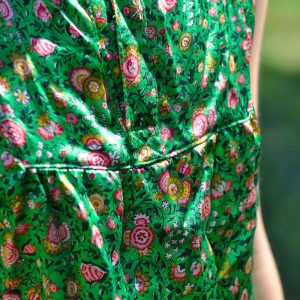 The next top is made from a fabric called ‘slub jersey’ in German. It is some kind of knit fabric. It has a texture and isn’t that stretchy, it is also rather on light side. Unfortunately the piece of fabric was completely skew after I had washed it. What a pain in the ass to cut something on the grain from it! I did manage to make a  Lady Topas top from it. The pattern is, as far as I see it, only available in German, but it is free. And I really like the neckline :) 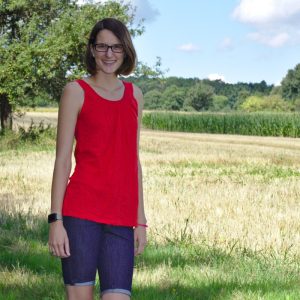 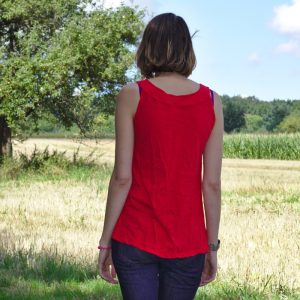 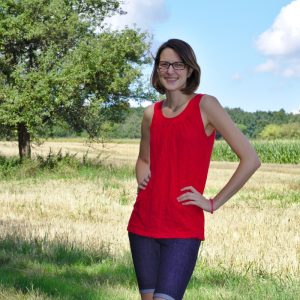 As you can see I lengthened the top quite a bit. Maybe a bit too much. This kind of top might lock better shorter. 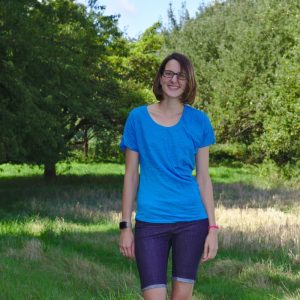 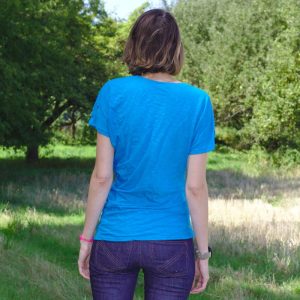 And the last item is another top made from this ‘slub-jersey’ only in another colorway and from another pattern :) the pattern is the Elaine Top from my favorite German pattern designer Pattydoo. I have sewn this pattern twice before at the beginning of my sewing career. The tops are long gone and I always thought that the neckline looked a little skew. But I thought that I did something wrong. Well… the neckline is skew on this top too! So maybe it is the pattern. The whole tee is skew, that’s kind of the point. And though I like how that type of top looks on others I’m not convinced that this is a style for me. But definitely good enough to wear on the couch ;)

And that’s it! :) I feel like I need to hurry a little. I might have sewn some more summer dresses, that I haven’t shown yet and I can see the end of summer coming soon! So watch out! :)