Okay, I’ll have to admit that this has gotten harder than I thought it would! Fitting bras seems to be effortless for some people and I know that I can go to a store and buy a fitting bra without any problems. So why it is so hard to sew a fitting bra for myself? Over the last few month I did manage to sew some Boylston Bras. And oh, do they look nice, but the fit is rather peculiar!The underwires feel way to tight. They even leave marks after a couple of hours of wearing. But at the same time the band is so loose in the front that it gapes underneath the wires. But in the back the band sits tight as it should. Maybe even a little too tight. I really cannot explain this behavior! Maybe it is my body rebelling against bras ;D Or it is my body giving me more excuses to buy more bra sewing supplies and to solve this mystery! So, as you might have guesses, that’s what I did: buy more stuff and go on! Hahahaha! 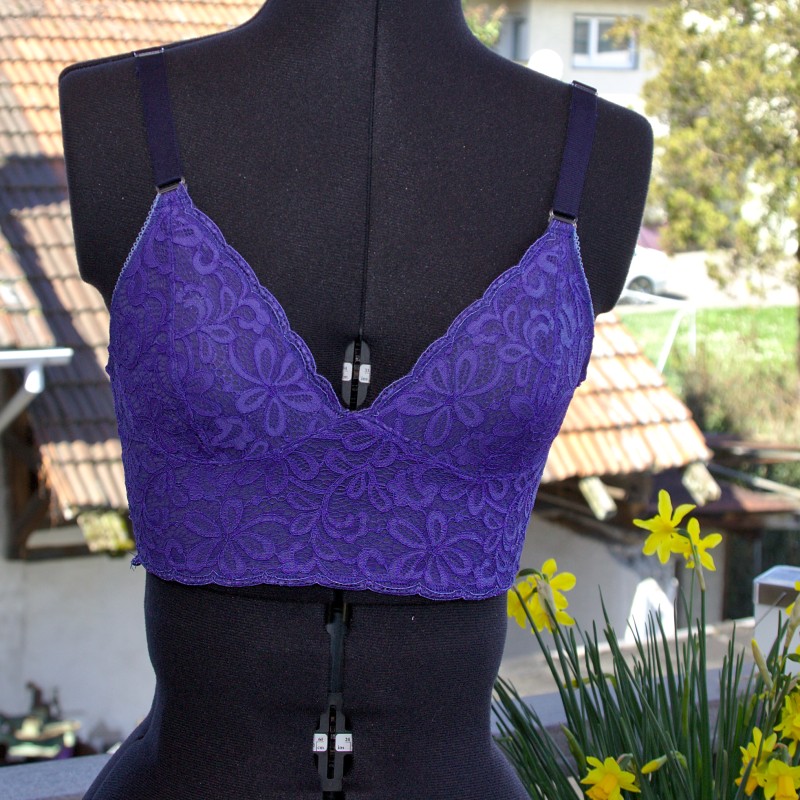 Well, I love myself a good challenge and I refused to simply give up on this! This could not be so hard! I don’t have problems with rtw bras, plus bras are one of those seldom garments that I don’t have to alter because of my height! Or at least that was what I thought and the more I thought about whether I maybe needed to adjust the bras in length somewhere I began to realize that that is the problem with me and bra sewing: I Don’t have any idea about how a bra should fit. While everyone was watching the Bra-Fitting-Craftsy class I was having fun sewing beautiful, dress-matching bras that didn’t fir me. and so I decided to start over. I still didn’t take that class, but I did buy the Watson-Bra pattern by Cloth Habit. 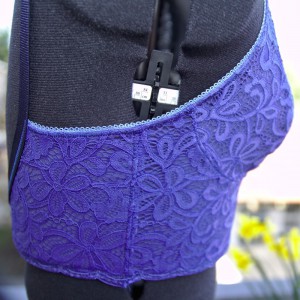 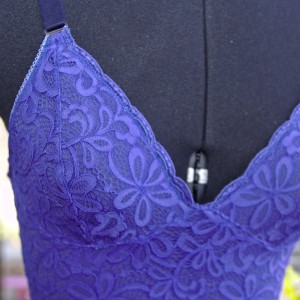 I stumbled across this pattern many times. And everytime I was deterred by the price it cost. I kind of didn’t want to spend so much money on a bra pattern that didn’t include underwires. Somehow I think that a bra is only complete when it includes underwires. This obviously is non-sense and because I didn’t get any further with underwires bra sewing i decided to finally give this pattern a try! 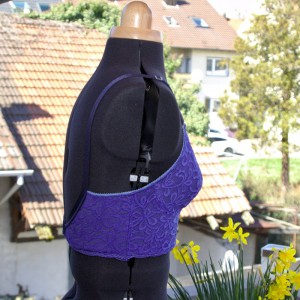 For my first version I used supplies that I had in my stash. If this bra looks familiar to you it is because I already made 2 bras from this lace. One of them I made from a German pattern and it turned out unwearable, the second one was a Marlborough which looked nice and fit me nice at first sight but everything about it was a little too small and so the bra was too uncomfortable to wear. As I also had made about 7 panties from the lace (Yes I bought tons of it!) it seemed convenient to make another matching bra. I reused the closure and the straps that used for those two bras preceding this one!

I didn’t measure myself before picking a size. I once measured myself and came out with a 30D and I’ve sticked to that ever since. But because the Marlborough Bra was sooo tight I decided to try a 32D first and then if necessary decrease the band size.

I also didn’t follow the instructions 100 %. Btw there is also a Sew Along which could be a little more in-depth to my taste. I used the tutorial on how to sew the cups from lace.

I completely lined the bra with powermesh. The instructions says that you don’t need to line the cups, but I thought that it would feel more “secure” to line the cups. Also because of the lining I did manage to sandwich all my seam allowances between the two layers and the bra looks neat from the inside now :) 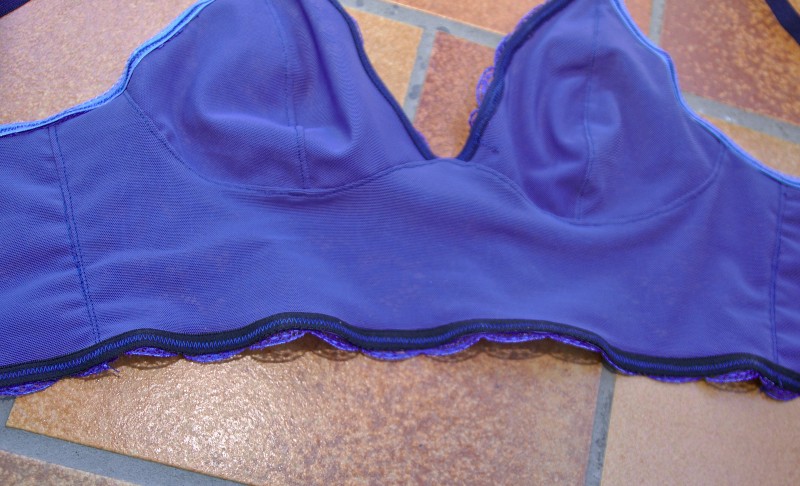 I also used the scalloped edge at the bottom of the band. I got that idea from Lauren of Lladybird, Doesn’t hear bra look simply gorgeous. In the post she explains how to sew the elastic to the lace and I followed her tips, and it worked out fine! 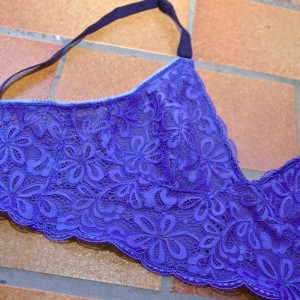 I found out, this time time while I was sewing the elastic that it is much easier to do a neat zigzag stitch if I use the three way zigzag stitch instead of the normal one.

I only had a closure with two hooks at home and so I altered the band to fit the width of it. After the first try on it was obvious that a wider closure would have worked way better. The wide band should give you some support, but the effect of that was lost as the width of the band decreased so drastically at the back. Also it was obvious that the band was too wide and I had some gapping underneath my arms. 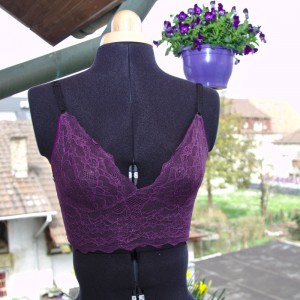 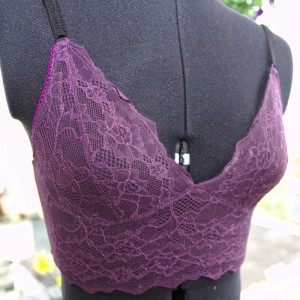 This time I altered my pattern directly after noticing the fit issues. I shortened the band and I adjusted the angle of the band like it is explained in the Sew Along. And I made a second version. 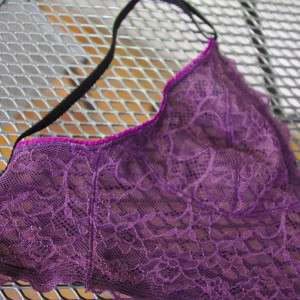 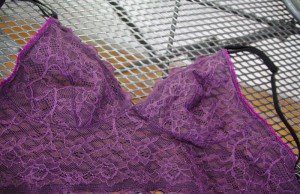 All the supplies for the second trial came from Wien2002. It is really hard to find what you’re looking for in their online shop but it is worth the effort, as the prices are low and the qulity doesn’t disappoint. 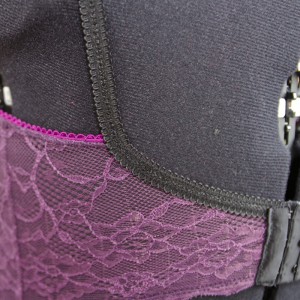 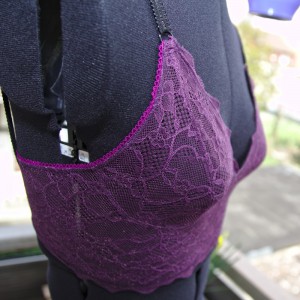 I couldn’t find any matching purple powernet and so I decided to use a black one and simply use a black closure and black straps to make this looks less improvised :) 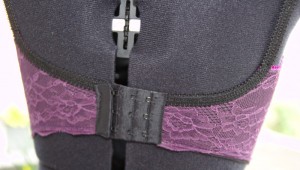 I used a three eyed closure this time and the overall fir is much better. The gaping has completely gone, only the band is still a little too loose. But I feel like I have enough support on this bra!

I think this was the first time I actually altered a bra pattern. All the times before I was too overwhelmed to see what the actual problem is. Because of the simplicity of the pattern and the very understandable and good instruction (much much better than the ones from Orange Lingerie in my mind) I was able to really improve the fit of tis bra!I 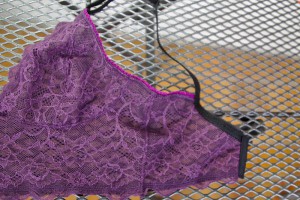 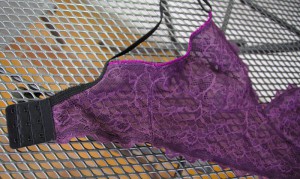 So, looking back and having gained a little experience in this field I can only recommend to beginners to start with a simple pattern! Not because the sewing of a bra is hard (it really isn’t) but because the fitting is and a complex pattern makes the whole fitting process a lot harder. 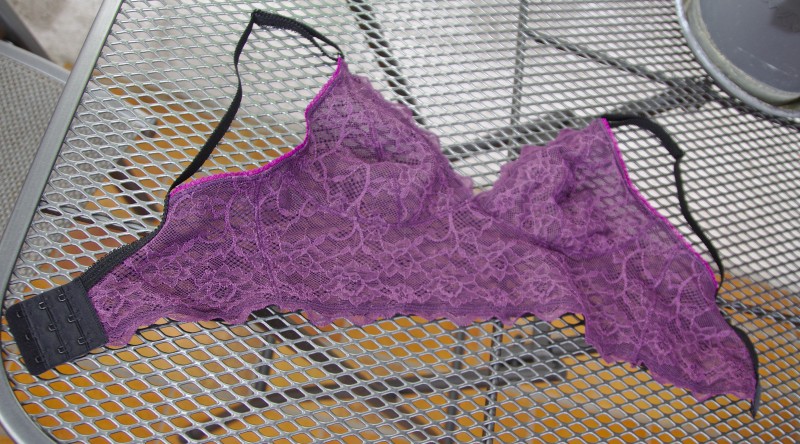 The bra really is comfortable. Now I feel kind of stupid to not have tried this pattern before. Why didn’t I start with this one? I really don’t need underwires, the support the Watson Bra gives it totally sufficient. I can also  wear the bra underneath everything, because of the stable lining I don’t have to fear to reveal too much, when wearing the bra underneath a tight top. Also I started liking the more natural shape the bra provides. But, what choice do I have? I’ve already bought like 5 different laces that want to be transformed into Watsons ;) 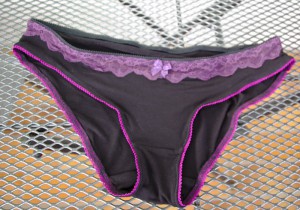 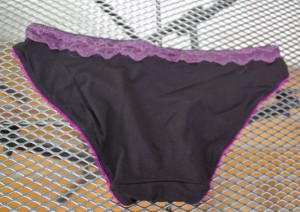 Oh, I also made the Watson Briefs! They’re included in the pattern. I liked the way the crotch lining is installed! It allows you to hide all seam allowances on the inside. I didn’t have much lace left, so I used everything I had left over and sewed the rests to the top of the briefs. I sewed size M what referred to my hip measurements. The panties are a little too loose, so S likely would have fit me better!

That’s all I have to say to my Watson underwear, but I have something off-topic: I’ve noticed that some of you with English-sounding names followed the German version of my blog on bloglovin. I just wanted to let you know that there is an English version of the blog on bloglovin, too, you can find it here. You may find following that version instead of the German version more convenient. or not! I just wanted to let you know :)