Today I’ll tell you another story of a pattern that I didn’t buy because I thought it was expensive Rigel Bomber by Papercut Patterns. In my mind Papercut sold their patterns for around 20 € each and that was just too expensive for me. It was even so expensive that it took a pattern as beautiful as the Rigel Bomber to lure me back on their shop site. I was really astonished when I learned that the PDF pattern cost only 11 €, peanuts! Ha! I don’t know why I thought the patterns cost so much more, but this isn’t the first time that has happened to me.I think my limits were higher, when I started sewing, because even 10 € seemed so much money for a single pattern back then. Now I think I would go as high as 18 € for a pattern I really like, if its printed. But its not like this number is carved in stone ;)

After that realization I made my one day trip to Paris and I found a beautiful faux suede in a greyish blue for around 9 €/m or something. At that point I was sure that I had never seen faux suede in any pattern store. Later I should find out that not only almost every fabric store sells faux suede but also, that I had some in a similar blue in my fabric stash. But back then I felt I really needed that fabric and I almost waited half an hour til someone had the time to cut me 2 m of it. It was the first store I was in and I was shy. later on that day I started screaming if I wanted something just like everyone else ;) 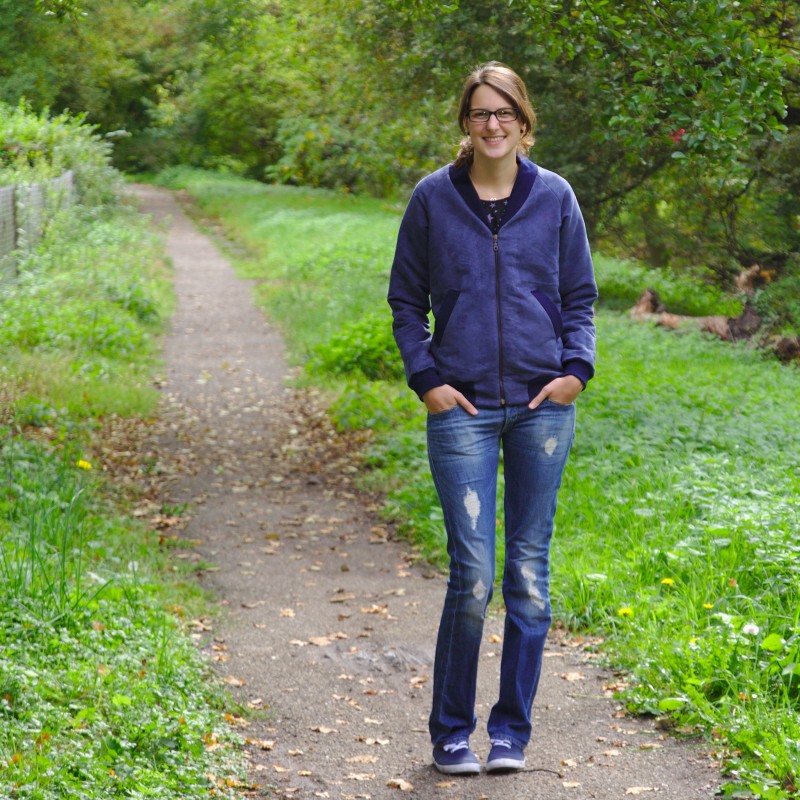 I loved how easy it was to sew this fabric. Much much easier than real suede and I was able to wash it! Ironing that fabric wasn’t nearly as much fun as sewing it though

Back to that pattern! after I found that in my mind perfect and unique fabric I didn’t have much choice but to by that pattern. I was also convinced by all those beautiful versions of it out there. 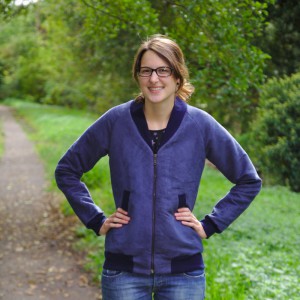 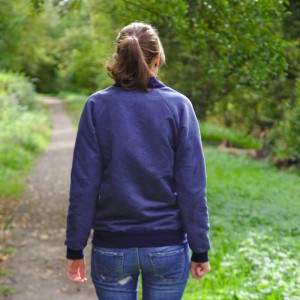 There are two versions to this pattern. The only difference between those to is that the version I didn’t sew has geometric details on the sleeves. There original Rigel Bomber is sewn without a lining, but I wanted one. I have lined some jackets in my years as a seamstress and this isn’t challenging for me any more. I did a lining that completely covers are seams, so the jackets looks neat from the inside and the outside. Even though I lined the bomber I still used facings. I cut the front and back jacket lining pieces after substracting the facings and I even remebred to add seam allowances. Then I finished both jackets, one from fabric, one from lining but I omitted the ribbings. I added the ribbing at the neck and sewed each jacket onto one long end of the hip ribbing, so that right sides were facing. 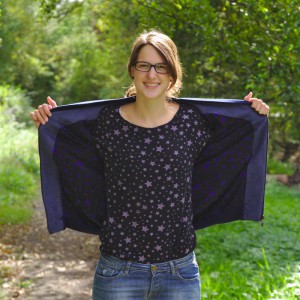 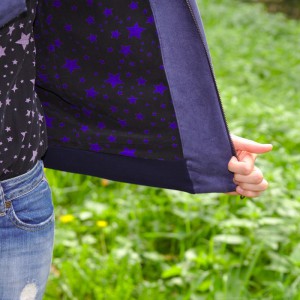 Afterwards I added the zipper to the outside fabric, I put both jackets right sides facing together and sewed them together at the centre front sandwiching the zipper in between them. I left an opening and turned the jacket through that opening. Afterwards I pulled the sleeves back through that opening and sewed the cuffs sandwiched between lining and outer fabric to the sleeves. In the end there are no seam allowances visible :) 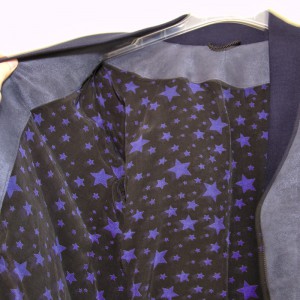 I am not a 100 % satisfied with the neck ribbing. I didn’t stretch it enough. The ribbing pieces are included in the pattern I was too lazy to check if they have the right length for my fabric. 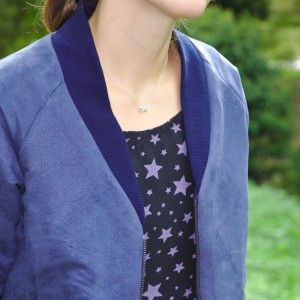 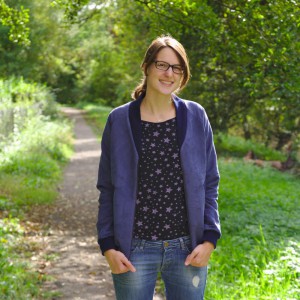 The lining fabric is rayon and I used the leftovers for the blouse you’re seeing the pictures. For the blouse I used the wrong side of the fabric as the right side because I thought this one looks nicer for a blouse. 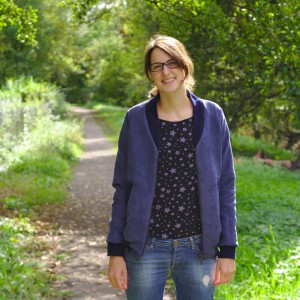 I sewed size XS which sounds very small to me, but according to the chart I could probably also have sewn XXS, but that sounds even smaller ;) I’m satisfied with how the jacket fits me :)

There are no lengthening/Shortening lines included in the pattern, but as the parts are almost all rectangles I didn’t have any troubles lengthening the pattern all by myself :) 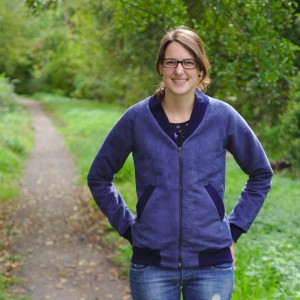 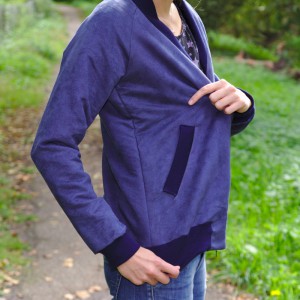 The only part that I had troubles with wear so welt pockets! Oh how I hate those. Not to look at them but to make them! If an instructions says you have to cut into your fabric at an angle of 45° until you reach the end of the seam line that’s it for me. I’m really bad at this is the result always looks a bit unclean. But as you can see I somehow managed that step too. 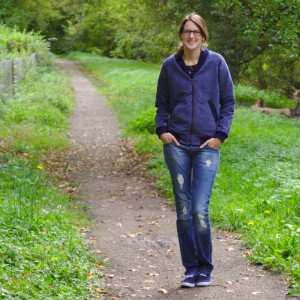 A few words on the instructions: they were neither bad nor good. There aren’t many difficult steps and when it came to those pockets I found the instructions not to be clear enough, also I think it would have been nice if they would include anything about adding a lining. I found kind of a Sew Along with tips at Ginger makes, but the amount of words, posts and pictures overwhelmed me and I didn’t really look at it, but I’m sure it would have been helpful. 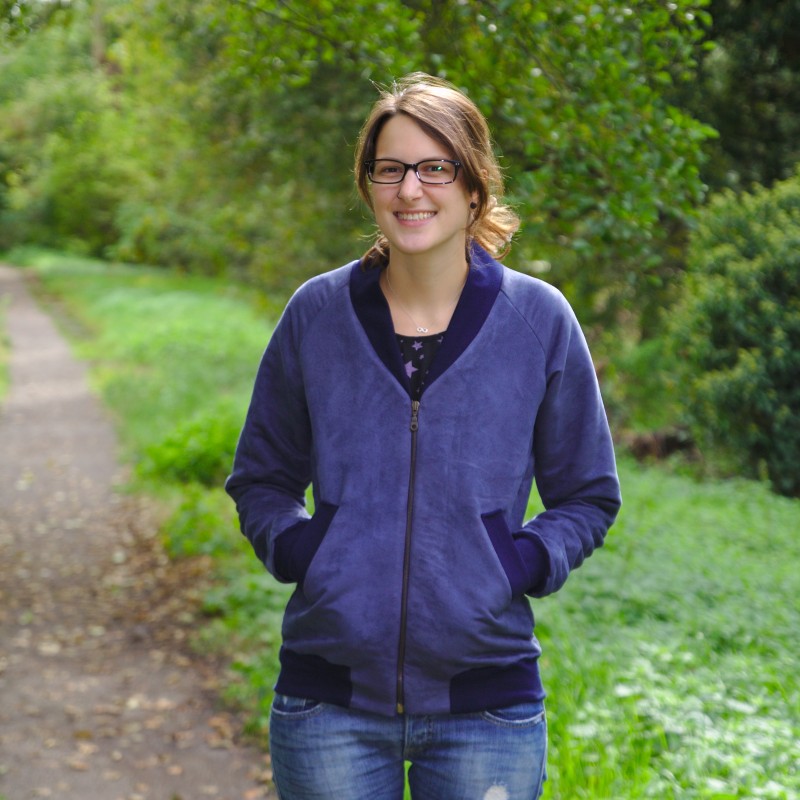 And that’s it for today!