I still don’t feel comfortable with my bra sewing skills. And I certainly don’t feel like I have mastered bra sewing at all. I tried some patterns and sewed some bras but no one of them was a bra that I felt I could wear everyday and be comfortable. The red Marlborough I made came close. But after a few wears I realized that the cup is tiny bit too small which looks weired underneath some of my tighter tops. The same thing only worse with the Boylston bra: the cup was too small and the band too tight.When I chose the size that I wanted to sew I didn’t measure myself I just cut out the size that I wear in rtw bras. But somehow it didn’t occur to me until lately that the problem might not be me but the fact that I needed a bigger cup size in Orange Lingerie patterns. And the moment I thought of that, I rememberer reading on Lauren’s Lladybird blog that she sewed Marlborough and Boylston also one cup size larger than she had in her rtw bras. 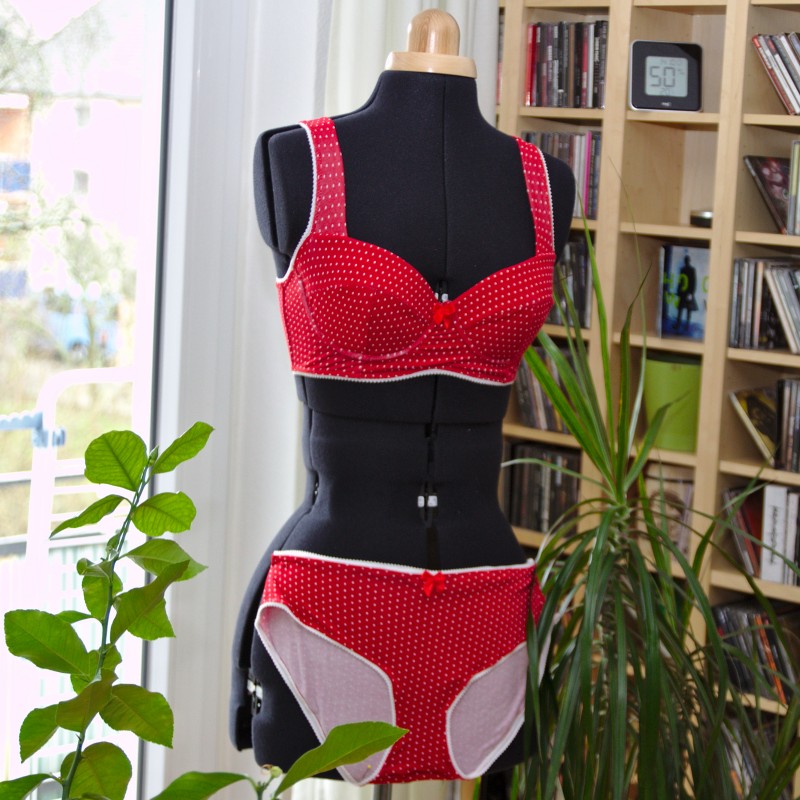 This made my motivation grow to give bra sewing another try. I made a short inventory and as I had all the supplied to make another Boylston Bra I immediately started. I only had crappy elastics at home but as this was going to be another trial version I didn’t care and just used them. 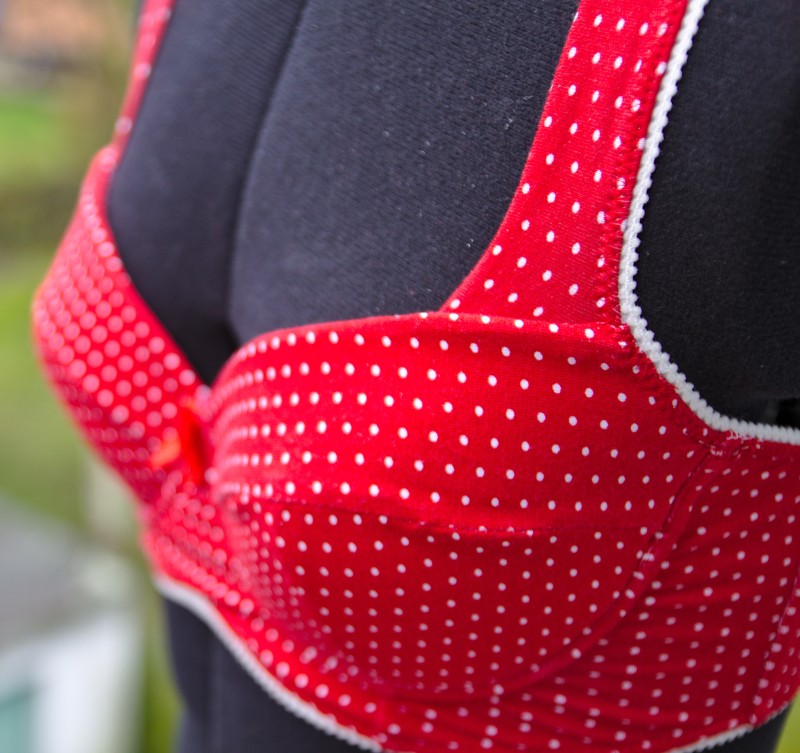 This time I cut one band size and one cup size larger (32D instead of 30 D before) and took way more care by stitching the cups. It is not really clear to me how to distinguish between the cup pieces. Most of them really look alike and there are only few notches to help you figure out how the parts come together, you have to be really careful. I was this time and the cups look way better than the last time I made them. 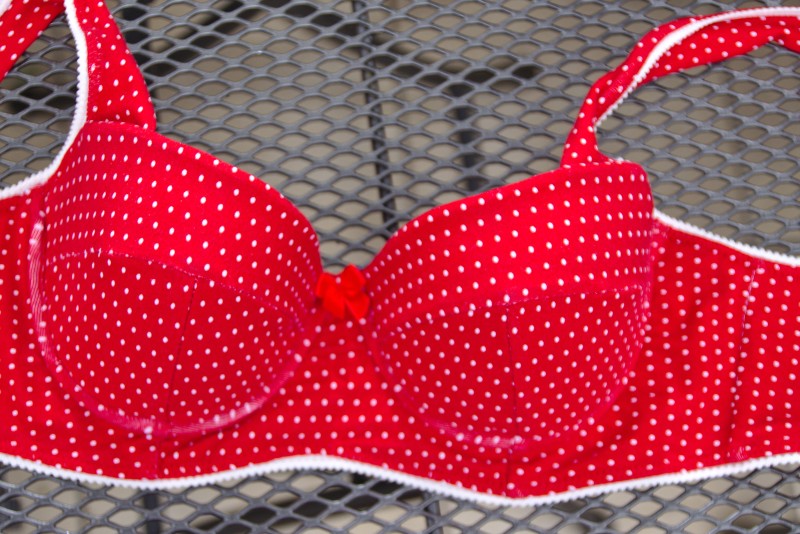 I again used foam to line the cups. I afterwards used stripes of the fashion fabric to cover the seams because I like the way that looks! I am not happy with the way the bridge wrinkles. I lined that piece with some non-elastic tulle and I think it wrinkles because I used a far smaller elastic band so that there is much more fabric underneath my cups. I have to take care of that next time. 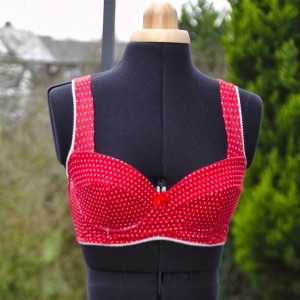 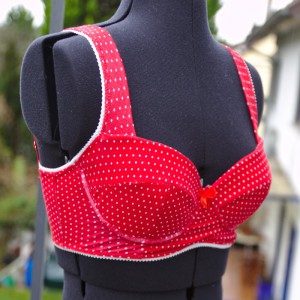 I didn’t have enough red underwire casing and this is how I ended up with this cool design feature: 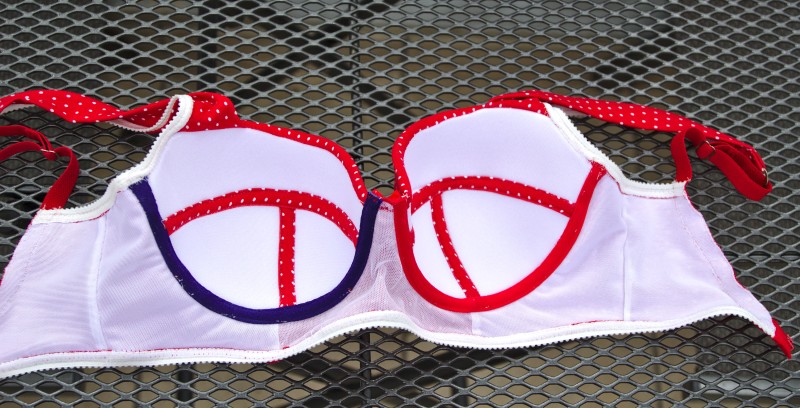 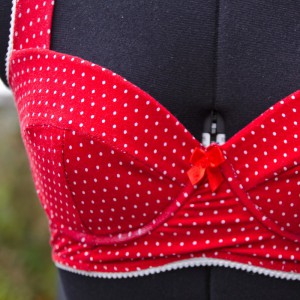 The fabric is a left over from a top I made and I thought it would be beautiful for a bra. It was a pain in the ass. Very elastic and shifty, but I think it does look cute! 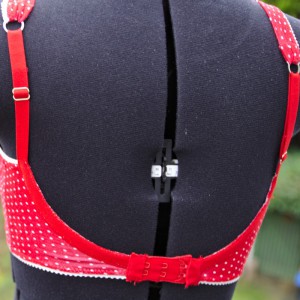 I used the closure and the straps from my old Boylston Bra. I had to rip it apart, that was a little sad, but I didn’t wear it. All of the parts of his bra were some when ordered at sewy. 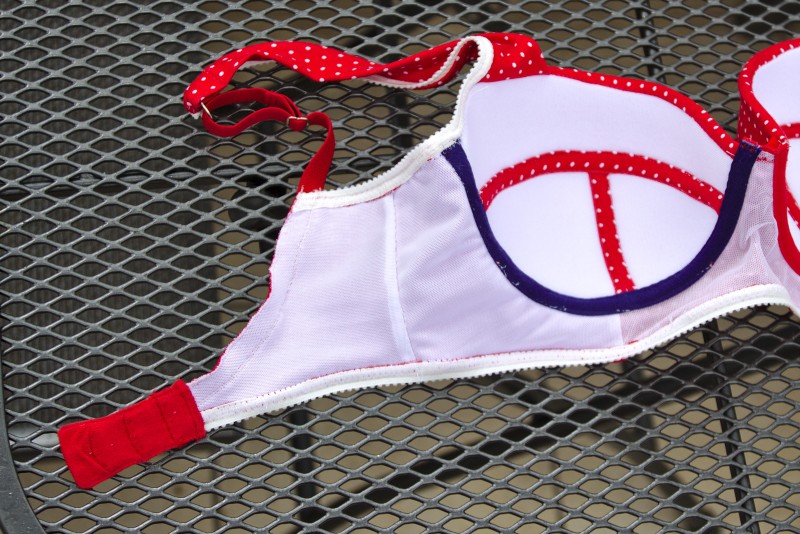 I’m not 100% satisfied with the fashioning of this bra. It really didn’t turn out that clean and when I look at my red Marlborough bra I can see that I did a much better job with this bra. This makes me think that I might have spend to much time between both bras. So much time that I forgot all my super cool tricks ;) 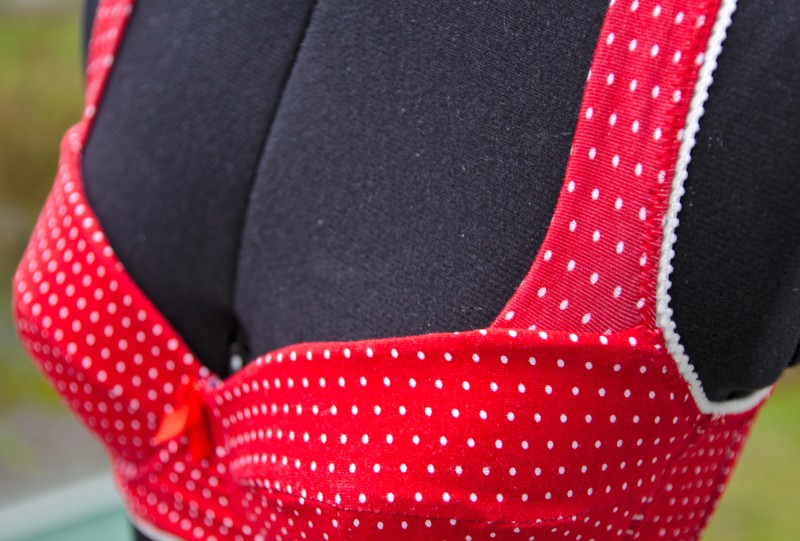 The good think is however that this bra fits! The cups are perfect, the band is a little too wide, but that can easily be changed next time. 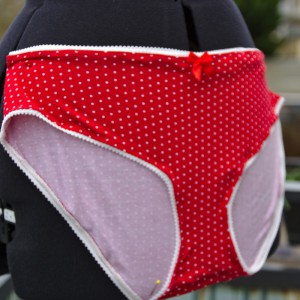 Because the bra turned out to be wearable I decided to make two matching panties. I used seamwork’s Geneva pattern, and I feel like I’ve used it for every panty I’ve made in the last year so maybe now is a good time to try a new pattern. So stay tuned for new panties on my blog ;) 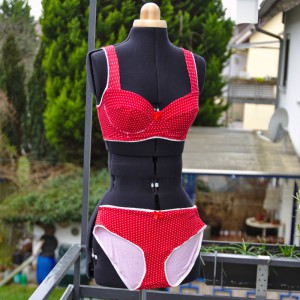 Also I made a huge order at wien2002. Their webshop is really crappy but they sale lots of bra making supplied for reasonable prices. I really don’t want my bra-making pause this time as long a the last one was and I hope I see you soon showing off another newly made bra :)