We are more than halfway through May and I want to show you what I wore last week. Carolyn asked me if I dress differently for MeMadeMay than usual and I thought about that. Knowing that I have a chance to show off my outfit I put more care into choosing it. Usually I just go with the first thing I see that I like. During May I think about what new combination I could wear and I try to rotate my garments as much as possible. So when the weather is a little colder I pick things that I cannot wear any longer once it is warmer. I don’t dress differently, but I take more care into picking something to wear. And that is a lot of fun. Usually I only dress up for myself and it is great to have the motivation to take the time to more carefully pick something. Because that is fun to me but I always seem to have something better to do. So, actually, I have already learned something from this year’s MeMadeMay: to enjoy picking out garments, even (or especially!) when i do it only for myself.

My second week started in my homeoffice, which basically means that I started this week in another pair of sweatpants ;) However I went outside to get something to eat and later took a walk with Marvin and I wore my second Rue dress, which is super comfortable and looks nice with my new favorite pair of shoes. Well to be fair I think everything looks nice with theses shoes, hehe, I also wore a pair of tights I made. 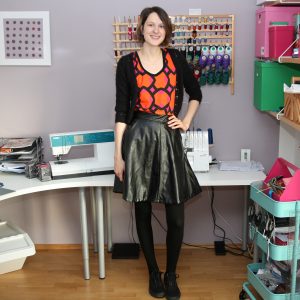 Thursday I had to leave the house to work in the office. I chose an outfit that Marvin called ‘edgy’ and of course that made me want to wear it even more. The top I’m wearing is pretty old and I’ve paired it with my not so old pleather Hollyburn skirt and a medium old Myrna Cardigan. As you might have guessed I also made the tights ;) Again! ;) Well, actually they’re the same as the day before.

On Friday it was time for another one of my favorite dresses. Although I prefer wearing woven over knit dresses I do love wearing my latest Gillian Wrap Dress. It is so comfy, the fabric is great and I love that sleeve length! 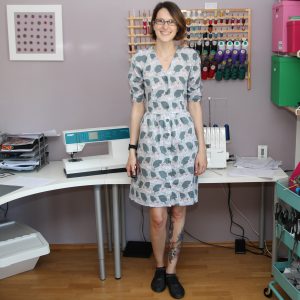 First day in May without tights! On Saturday it was so hot that while I was wearing my Darling Ranges dress I wished I had opted for something sleeveless. With that dress I am wearing my brand new pebble smartwatch. I thought that a smartwatch was a gadget that I could live without. But since pebble was sold to fitbit and it is known that the essential pebble cloud will be shut down end of the year you can buy pebble watches for almost nothing. So when I red about Gadgetbride, an Android App that replaces the pebble firmware and runs the pebble completely independent from any cloud and also independent from the Google Apps I was so curios that I bought a reaaaally cheap pebble. And so far everything works like a charm. Not that I think that anyone really needs a smartwatch, but it is a lot of fun to play with :)

Until the afternoon it was sunny and warm and I took my Svaneke Dress and Marvin out to pet some super cute baby goats and eat ice cream :) 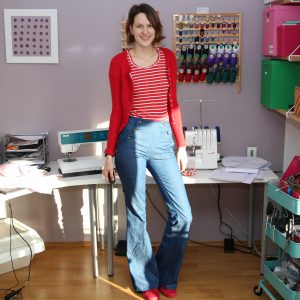 First time I took my new pair of sailor pants out to the office! The great news is, that after wearing them in a little the buttons stopped pulling so much. Also the buttons weren’t uncomfortable at all, I thought that might be the case when I first tried them on. People were looking at me a little more than usual, but how could I blame them ;) I wore an unblogged Renfrew Shirt with the jeans, and because it was chilly in the morning I also wore my Alecia Beth Cardigan. 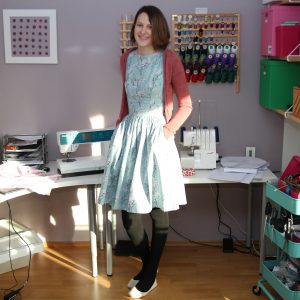 Yesterday I took another treasure out of my closet and wore it to the office: my Emery Dress! I thought it would be chilly in the morning so i wore it with tights and a Featherweight Cardigan but it got super hot and I wouldn’t have needed them. 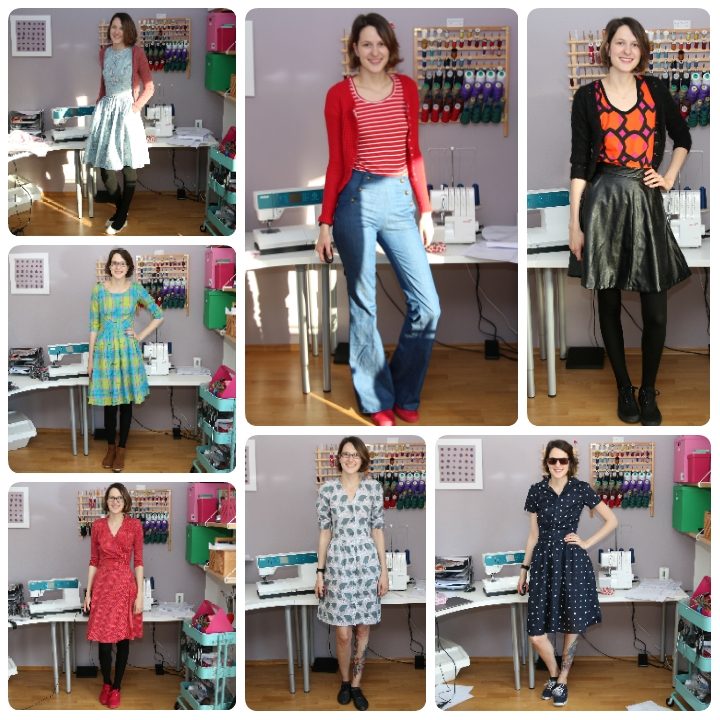 As you might have noticed: I love wearing dresses! Dreses are sooo easy, you don’t need to combine them and everyone thinks you’re all dressed up. A secret weapon so to speak. It will be interesting to see if I have enough dresses to not wear any one of them twice. I’m not sure about that, but just to be safe I think I should sew another one right now ;)

Have a great week!